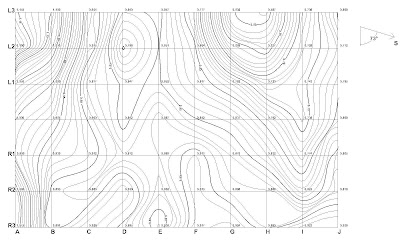 This is our contour map of XU Soccer Field (from goal post in front of ICC to goal post in front of Eng'g Bldg.). Surveying by open traverse was used (since the area is small), with the vertical circle set to 0 degrees. Point A was assumed to have a 1.000 meters elevation.
AutoCAD was used in the map-making. Index contour lines were set to 0.05 meters.
Downloadable Data Sheet (use Export option): Topographic Survey of XU Soccer Field Data
The data sheet provided was the one we used in the field. It can calculate elevations instantly upon entering the data. Succeeding worksheets are used for interpolation during map making.
Written by Fritzi at 15:42 No comments:

Email ThisBlogThis!Share to TwitterShare to FacebookShare to Pinterest
Topics: projects

On the 3rd of January 2009, Cagayan de Oro's New Year was met with tragedy as tropical depression "Auring" devastated the city with flash floods. This has shocked thousands of Kagay-anons as this has never happened in our beloved city before.
The areas of Macasandig and Carmen have our neighbors evacuated. They need all the help they can get - their homes are either filled with waist-to-head level of water or are totally destroyed. Food may be scarce since nobody was prepared for this. PLEASE HELP IN ANY WAY.
-UPDATES-
On January 11, 2009, another flood has ravaged CDO. This time, the areas of NHA, RER, Kauswagan, Iponan, Bulua, Canitoan, Lapasan, Macasandig, and neighboring towns Alubijid, Opol and cities of El Salvador, Iligan, Gingoog are affected. The floods caused structural damages on bridges and roads and houses; landslides; and lives. 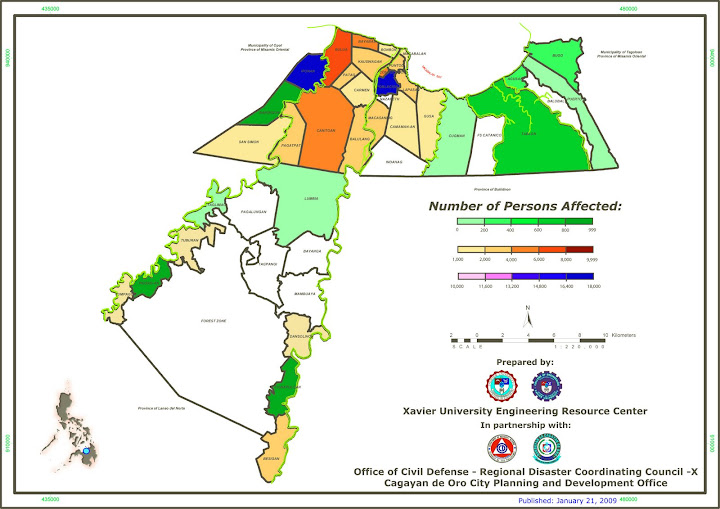 This is the CDO Damage Impact Map taken from the recent floods in the city by the XU Engineering Resource Center (headed by Engr. Dexter Lo).
The REGIONAL DISASTER COORDINATING COUNCIL of Region 10 issued this Progressive Report as of January 12, 2009, 07:00 PM.
Joan Jamisolamin of KKP-SIO/ RSO wrote:

On the rains, floods and assistance to flood victims
The calamities that Cagayan de Oro suffered from two floods that hit the city within a week from last January 3 to January 11, 2009 are far from over. On the night of Jan. 13, Tuesday, more rain poured in the city and in neighboring towns in Bukidnon, causing theCDO and Iponan rivers to overflow and flood waters to rise again. As of January 14, 2009, in Cagayan de Oro, the number of barangays hit rose to 44, with about 15,000 affected families.
Other areas, affected are 13 barangays in Gingoog City; 4 barangays in Oroquieta City; and one barangay in Iligan City, and 15 municipalities of Misamis Oriental. Landslides also occurred in the upland barangays of Taglimao, Pigsag-an, Tuburan and Tumpagon, in San Simon, Iponan, Lapasan, Gusa, Balubal, Camaman-an and in Macanhan, Carmen, in the city of CDO.
Xavier University, through the Kristohanong Katilingban sa Pagpakabana—Social Involvement Office (KKP-SIO), is responding with relief operations. Cash and goods donations are most welcome. Displaced families are in need of food items, rice, beddings and blankets, clothes and slippers for toddlers and adults, baby diapers, male and female underwear both for children and adult, bath and bar soaps, can opener, utensils for cooking.
Those who would like to help can send donations to the KKP-SIO, 1/f Aggie Building, Xavier University. Telephone number: (088) 858-3116 local 3210 and 3215. Deposit to: Xavier University, Account Number 933-101-3363, BPI. Please inform KKP-SIO of any deposit made, to enable monitoring.

Interestingly, there is a real-time weather satellite image that can be accessed to all: http://www.pagasa.dost.gov.ph/wb/sat_images/satpic.jpg

News about the flash floods: